Background
Prior to being elected Sheriff at Rockwall County Texas and being sworn in on January 1, 2001, Mr. Eavenson managed his own consulting firm / investigative company for 5 years. Previous to forming Harold Eavenson & Associates in 1995, he spent 16 years in the financial industry, 8 as Director of Security of one of the largest banks in Texas. As Director of Security of InterFirst Bank Dallas (formerly First National Bank in Dallas) he was responsible for the security program and managed / coordinated the bank's executive protection program. His department was also responsible for all internal investigations. 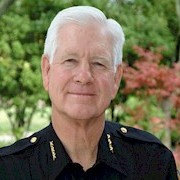 Former Positions
He served in the following positions with the successor organizations of InterFirst Bank Dallas:
Before accepting the Director of Security position with First National Bank in Dallas, he spent 18 years in law enforcement with the Texas Department of Public Safety in the Highway Patrol and Criminal Intelligence Service (now known as Special Crimes).

Education and Experience
He holds a BA in Psychology from the University of Texas at Dallas and is a graduate of the FBI National Academy, 112th Session. Currently, he serves on the North Texas Crime Commission Board of Directors, the Commission's Law Enforcement Liaison Committee and previously served on the Commission's Executive Committee. Also, he was elected to the Board of Directors in June 2007. He was appointed to the Sheriff's Association of Texas Board of Directors in July 2007. He was one of 13 U.S. Sheriffs selected to go to Israel in February 2006 to meet with public and private sector experts in regard to Homeland Security issues.
Elections
Polling places, locations, and times