Background
Chief Deputy David Goelden began working for the Rockwall County Sheriff's Office as a Chief Deputy in October of 2000. Prior to working for the Sheriff's Office, he retired from the Dallas Police Department as a lieutenant in 1999 after 34 years of service. He has served in various positions within the department including patrol, narcotics, and crimes against persons and has had several high profile assignments. 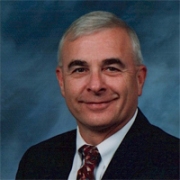 Awards
During his tenure with the Dallas Police Department, he has received numerous departmental awards and received The Professional Achievement Award from the Governor of Texas. He has been nominated for the IACP Parade Magazine Award and the Webber Seavey Award for Quality
in Law Enforcement.

Education
Chief Goelden graduated from the FBI National Academy in 1997. In addition, he has a Bachelor of Arts in Criminal Justice and has earned a Master of Science Degree from Abilene Christian University.

Home Life
Chief Goelden and his wife, Bobbie, have 2 children and 2 grandchildren. They have lived in Rockwall since November of 1998.
Open
Government
Records
Law
Enforcement
Library
Employment
Tax Office
Government Websites by CivicPlus®
[]